We here at ecAmusements have a variety of stand up and sit down driving arcade machines in stock on a regular basis. We go through each machine one by one and make any repairs needed before they are offered for sale. Prices for our arcades driver arcades in this category normally range from $600-$12,000. The price is dependent on the game title, age, and condition. Whether you like the classic Cruisn’ USA, World, Exotica or a modern Fast and Furious, Drift, Super Bikes driver arcade we have the right one for you! Most of these games have the ability to change the settings of the difficulty, price per game, free play, high scores, along with other options in the operator adjustment settings. Some of our games have new artwork installed and others are all original. Check out our current inventory below! If you have any other questions feel free to CONTACT US with and questions you may have! Our direct line is: 484-433-5145

** If you do not see items listed below please allow Java to run or/ and allow pop-ups from ecAmusements.com **

Games We Sometimes Come Across​​ 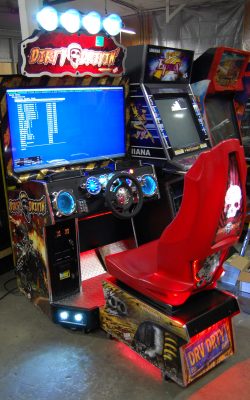 Players engage in vehicular combat, and gear-shaped power-ups are available throughout the track, which can be used to destroy enemy vehicles by pulling a skull-shaped crank, which do not return to the race after getting destroyed. Players can also jerk the wheel to hit opponents, and whenever an opponent gets destroyed, a photo of the opponent appears at the bottom of the screen, as well as a taunt. Points that the player earns increases the amount of weapons available to the player on the “Jerk-O-Meter”. Also scattered throughout the track are crates with power-ups. The game has a password system, where players enter a PIN to save their progress. 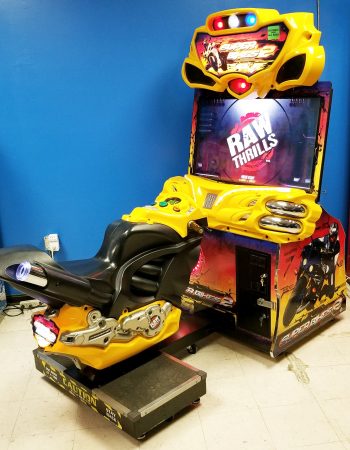 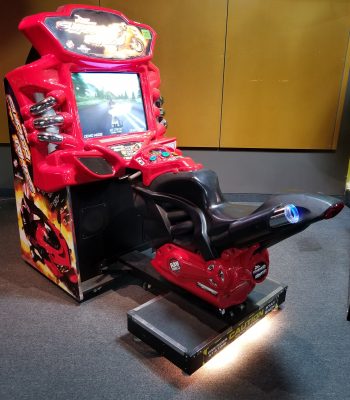 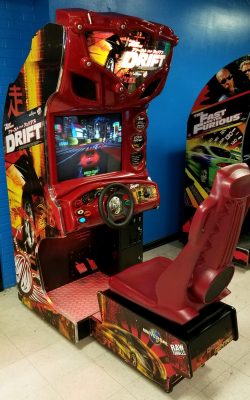 The Fast and the Furious Drift Arcade

The game allows you to save your progress on the machine via a ten key. You are able to upgrade your vehicle every time you start a new race and there are plenty of vehicles to choose from and there are new vehicles that become unlocked when your lifetime winnings reach a certain point.Look for shortcuts and other secrets on each track. Also you get points for aerial tricks, damage and air time. 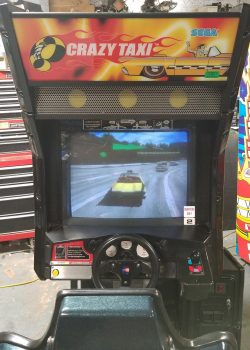 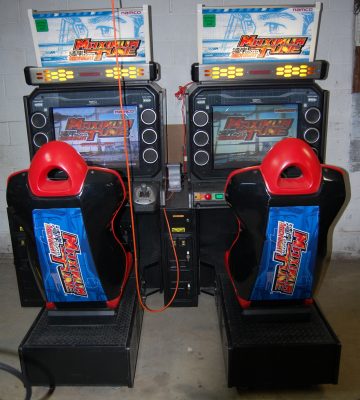 The story gets its roots from the street racing that occurs on Tokyo’s Shuto Expressway Bayshore Route. ‘Wangan’ (literally bayshore in Japanese) is the endonym of this longest, straightest road in the entire country. There is also road traffic to contend with, including a fair number of heavy trucks. Because of this, the action is inherently hazardous, and wrecks are common. Blown engines are also a frequent hazard, especially with the extremely high power engines. Drift around the tracks and beat your opponent! 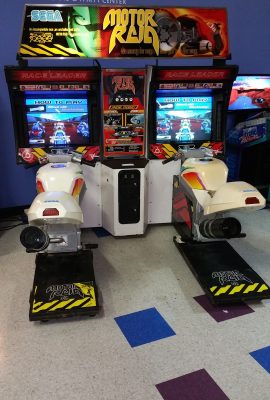 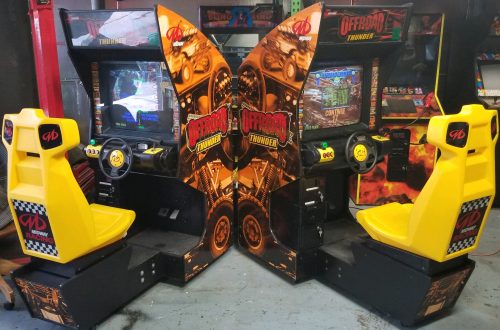 Demolition – Run into other cars without you getting caught. If so, the game will be over.

Rally – Race and catch canisters of nitros (Blue – +3, Red – +5). Players will be required to get first place to earn a free race as a reward.

Snag The Flag – Players must win the game with the flag. When an opponent overtakes the player, the player loses the flag to the opponent. There are 4 opponents in this mode. 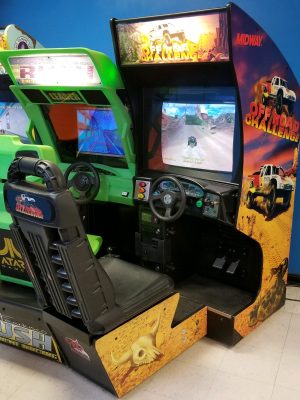 Off Road Challenge was produced by Midway Games in 1997. Choose from a variety of off-road vehicles and race around the country attempting to finish the race ahead of the other drivers. 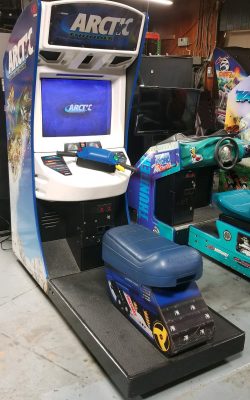 Pick from six snowmobile riders and six tracks to race on. The player can pick up power-ups like boosts or atomic snowballs. 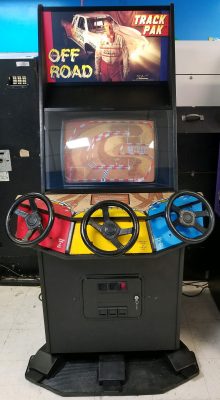 The game has eight different tracks with a total of sixteen different configurations. The names of the tracks are Sidewinder, Fandango, Wipeout, Blaster, Huevos Grande, Cliffhanger, Big Dukes and Hurricane Gultch. At the beginning of the game, players can put in their initials and birthday and select a nationality. The selectable nationalities include U.S.A., France, Great Britain, Italy, Germany, Australia, Japan, Cananda and Mexico. After this, the players begin racing. 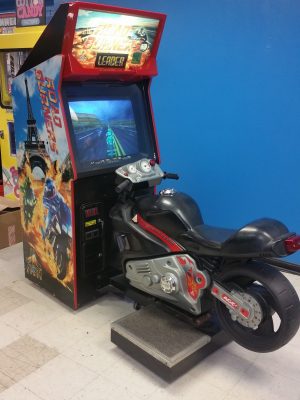 Ride a motorcycle while avoiding obstacles. Control steering using handles or by leaning the motorcycle seating. 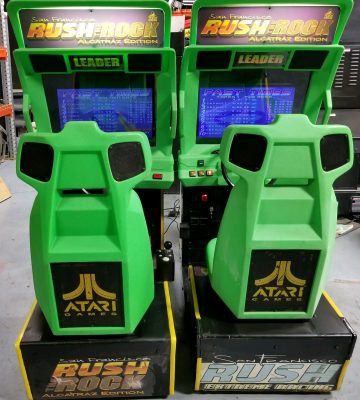 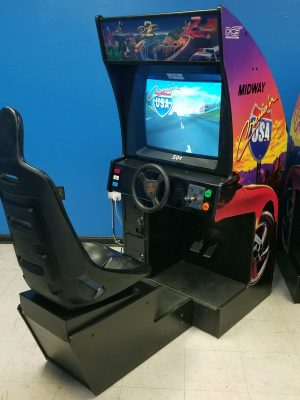 Players race down one-way courses consisting of streets vaguely based on real-life locations. While racing, they do their best to avoid various road hazards such as oncoming traffic and construction. Players chose between seven different cars to race with. As in most racing games, the car can simulate either an automatic or manual transmission. Automatic increases the speed of gear shifts, while players using the manual transmission must switch during races. Players must reach first place to move on to the next track. Unlike most racing games, there is the option to change the music by pressing the music button. Players have the option to select the color of the car that they choose to play. 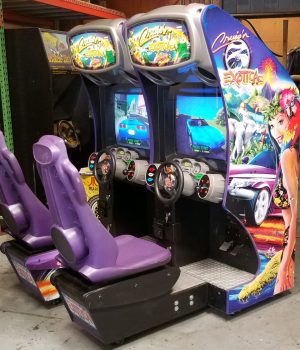 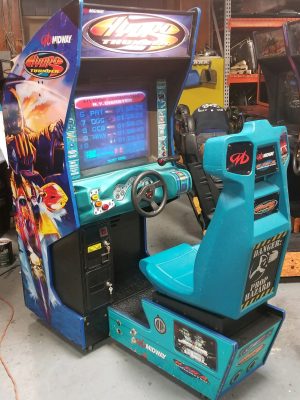 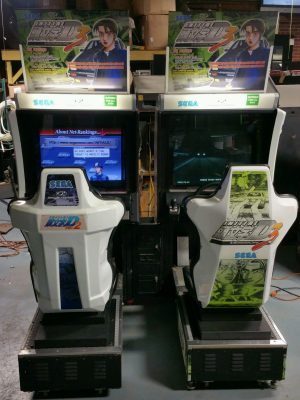 A fast-paced racing game that is based off of the anime Initial D. This is a fast-paced touge-style racing game that takes place on twisty mountain roads in Japan. Initial D features 6 tracks, which consist of two circuits, and four linear tracks. The tracks have many options such as forward, reverse, dry, wet, night, and day.Initial D features many fully-licensed manufacturers, with their own collection of cars, such as Toyota, Mazda, Suzuki, and Honda. Initial D uses a credit card-sized memory card for saving your progress in the game. Printed on the card are your name and what kind of car you have.

The player goes behind the steering wheel of a Ferrari sports car with a young lady in the passenger seat through 5 of 15 stages. As before, the player can choose their course and the soundtrack. It features an official license from Ferrari this time, not only featuring the iconic Testarossa of the very first game, but also adding another seven Ferrari vehicles. it also expands further based on the original concept, employing young, fashionable characters and incredible rendered landscapes.

This is not a racing game based on realism and physics: This is better shown by the drift aspect that it heavily promotes allowing the player to better control their vehicle around high-speed bends, near-missing traffic vehicles as your girlfriend squeals in delight filling up the heart point meter. Drift is made differently between automatic and manual control, providing extra challenge. 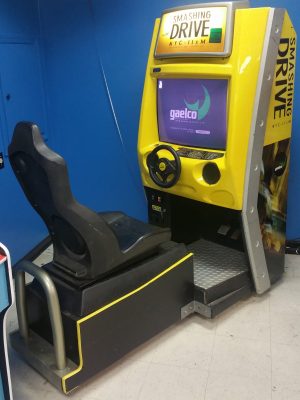 The object of the game is to complete a selected circuit in the least amount of time while dodging the obstacles that cut across the path and keeping ahead of the computer-controlled cab and the other competitors. There are so many shortcuts and hidden power-ups that the game is hardly ever the same. Qualify with a high score in the round to get the extra bonus round. Qualifying twice will allow a player to drive the additional expert track. 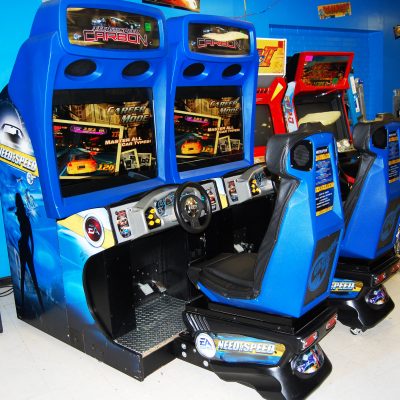 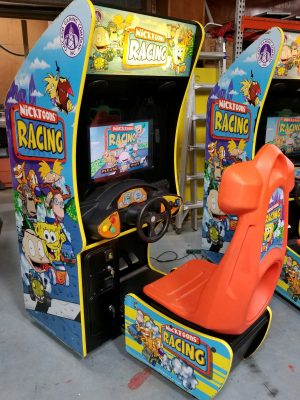 The player pilots a futuristic “speed bike” at speeds of up to and even exceeding 900 mph through various tunnels and courses, with changing environments, hazards and enemies. The final goal is to reach the “Ultimate Challenge”, an endless race filled with surprises, where the player must simply get as far as possible in the allotted time. Markers on the Ultimate Challenge course show the names of the five players who have traveled the farthest, who are tracked independently of the game’s traditional high score table. 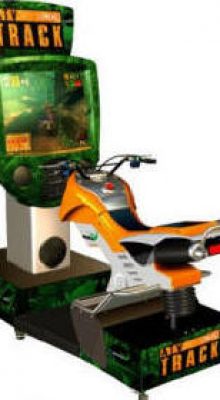 ATV Track is a racing game, featuring large ATV’s Quads racing through the Amazon. It is a one player game that can be linked up to another unit for versus play. There are two playing modes, Practice and Competition. There are 4 different courses, and the player can choose from 4 Quads and 2 Riders.

Please support this website by adding us to your whitelist in your ad blocker. Ads are what helps us bring you premium content! Thank you!